Happy to be stitching again

For the past few weeks, I have not really felt in a stitching mood. The week at the RSN had been really intense and I was quite scared to start stitching on my own. Moreover, I had a job-change on my mind; leaving a company I had worked in for 8 years and joining one which I actually knew rather well after having been on secondment there for at least one day a week for the past 8 years. Even though I instigated this change, it did occupy my mind, which meant I did not feel relaxed enough to be stitching.

I did want to work on my crewel work project but whenever it tried it, I was just getting annoyed with myself as the stitches never turned out the way I wanted to and ended up unstitching it again and I was getting annoyed by fraying threads and knots. So, in the end, I just decided that I should leave it until I was in a stitching-mood again. Not that I did not do anything, I made myself a pair of trestles, a thread catcher and finished two Ed’s animals. On Friday, my stitching mood came back and I have been stitching ever since.

Even though I had decided against having the traditional tree of life and hillocks a branch is still central to my design. Since it is such a prominent element I feel it is important to finish that element first as it will dictate the overall look of the finished piece. The problem is that the entire S-shaped branch is filled with stem stitches and a lot of them. However, I made a promise to myself that I would finish it before getting carried away with new and more exciting stitches.

When I designed the project on my first day it was decided to fill the central part of the S-shape with french-knots (see the stitch plan below). However, throughout the week other tutors commented that it might be better to leave the central part empty or fill it more sparingly to create some more open spaces and prevent the design from becoming too dense.

As the jury is still out of that one, I decided against painting or drawing the edges of the central part and let the stem stitches that surround it dictate where the empty-space would end up.

I found it really good fun trying to decide where to start and finish my rows of stem stitch in order to create and nice flow and gradient between the 5 different colours of red. In order to achieve this, alternated in stitching the outside and inside of the shape and stitched 3 rows of the 2 darkest and 2 lightest colours to end with a row of the middle colour on either side. I did find that it was really nice to get some momentum going for the stem stitches, as you can really see your project developing. 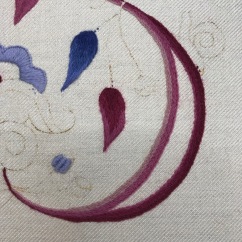 Something that still worries me a bit is the range of pinks that I have used. As you will notice some of the colours look too similar whereas there is a big gap between others. However, this is probably inevitable when you have to pick 5 colours from a range of 9. Once the project is completely finished I suppose it will look alright. The blue’s, on the other hand, seem to blend much better.

Another thing that I have noticed is that some colours are so much easier to stitch with than others. At the moment 144 is my favourite pink as it frays far less than all of the others and is also of a more consistent thickness.

I have now finished the bottom half of the S-shape. I will turn my frame around so I can do the top-half.

I would really like to read your views on the design and whether I should fill the central part of the S-shaped branch or whether I should maybe do extra rows of stem stitch in the middle colour in order to make the space smaller.

13 replies on “Happy to be stitching again”

Had a really fun afternoon at my local (more or less, as it is half hour drive) thimble-collectors fair.
Loving my ‘new’ vintage knitting needle case. This one is made from bakelite by the company BEX (British Xylonite Co) and dates from the 1960s. They have produced several different designs of knitting needle cases and in various different colours (e.g. red, green, light green, light blue, pink and brown).
FOR SALE In case I have got you hooked on the little Observer’s books, I have got a couple for sale. They are £8,- each, apart from the Butterflies ones as they are £6,- each. I will ship anywhere, and will quote you the postage. If you are in the UK I am happy to hold on to them and ship when I am back in the UK to save you on postage. DM me if you are interested! #observersbooks
Look how pretty my collection of Observer’s books is looking on my new @stringfurniture shelving. The first shows them by colour and the second all in numerical order.
This side of my studio has pretty much been a mess ever since I took my big bookcase apart. I finally managed to tidy it up a bit today.
This afternoon I have made a base for the Tiffany lampshade I had bought at Tuesday’s Sunbury Antiques Fair.
Yes! I managed to fix the lid of my creative box this morning! I removed all of the excess fabric and added an extra magnet to the lid and recovered the back of the board.
When vintage finds and new purchases just match perfectly 😍😍😍
Already my last class of the week! It has flown by.