Those of you who follow The Stitching Sheep on Instagram will have noticed the daily updates of the Edsadvent CAL I joined. As today is the 24th of December it is the final day of the advent calendar and that means I have finished the animal! 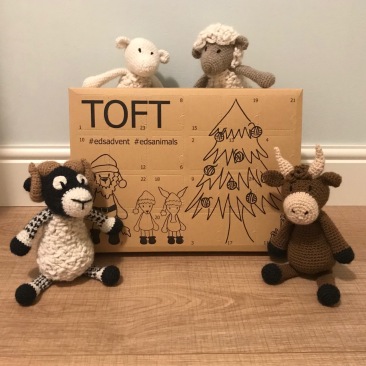 She is called Gloria and she is a Red Panda.

The animal-species we were crocheting was not revealed until today. However, after stitching the body and the tail I had already guessed the animal we were making a red panda as I couldn’t think which other animals would have those feature and after making the head she really could not be anything else.

Despite the initial disappointment of an opened advent calendar, which I wrote about in my last post, I really enjoyed this CAL.

It is a really novel way of doing an advent calendar. Usually, you just get presents and you have to think about what you will make with them, but this way you get to make something with it too. It was really fun too, doing a daily rather than a weekly CAL. Fortunately, each section did not require too much time so I could complete each day after work. Opening each door was not very surprising though as you knew it would be a skein of Toft DK yarn and it often was not a big surprise which colour you would get.

I would definitely join next year’s CAL as I had so much fun crocheting it and sharing it with everyone.

7 replies on “The Edsadvent CAL”

Robin and Sir Guy are back! Don’t they look amazing in the dark mount and frame? It really makes the sunset scene pop out. A huge thanks again to my usual framers @inlijstenjandartbreda for the fabulous job making the bespoke frame.
I just love my ‘new’ vintage spool holder, which I got at an online auction. This countertop display was originally intended for Brook’s Patent Glace Thread, but after a little modification the perfect size for my @maisonsajouofficiel thread spools! It looks so pretty with the rainbows of colours. Have a look in my stories to see it in all its glory!
I love reading @inspirationsstudios Magazine. There is always so much inspiration in every single magazine. Because I enjoy them so much I never got rid of a single issue. However, they and other magazines I have kept are starting to take up to much space and I made myself make a selection of the issues I am keeping.
From the mess on the left to a perfectly organised drawer on the right…
Look how beautiful the vintage sewing machine cabinet looks after some TLC!
The sewing machine cabinet I bought from @19toen yesterday was filled to the brim with vintage haberdashery.
Some of you might have spotted in my stories yesterday that I bought myself another lovely piece of vintage furniture: a sewing machine cabinet!
Finished my new top! It is a lovely retro summer top. I am really pleased it fits as it my first item of clothing I have ever crocheted.
OMG! I have just received the result of my RSN diploma stumpwork piece and I got 95%! I am totally blown away. I just can’t believe it. So incredibly happy.