Yesterday, my mum and I attended the Handwerkbeurs in Zwolle. It is the largest needlecraft show in the Netherlands with about 220 exhibitors. This means it is just over half the size of the Knitting & Stitching show at Alexandra Palace which hosts about 400 exhibitors. However, both shows have a very different feel. Whereas the Knitting & Stitching show hosts a lot of designers selling they own kits or yarn, the dutch show hosts more resellers. This is not meant as a value judgement, but merely to state how different types exhibitors make a different type of show.

I had attended this show before in 2015 and since then it has grown massively as it now occupies two halls instead of one. My mum had not been before and has not been crafting a lot lately and she was amazed about the range of products on offer, the types of craft you can get involved in and the amount of people interested.

It was indeed rather busy, but that was really my fault as I am working during the week so the only day we could go was a Saturday. However, that said, the show was set up pretty big with wide isles, which made it relatively easy to see the stands. 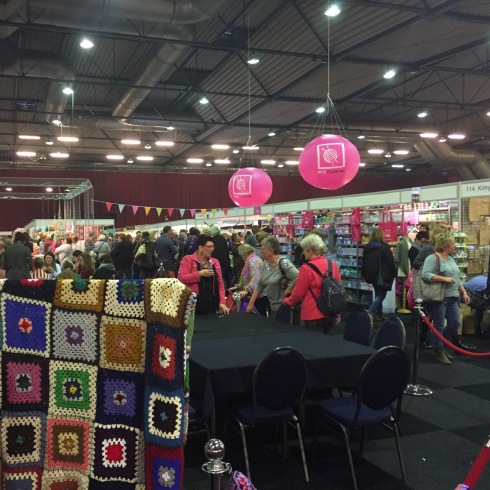 It did become quite obvious that I am a rather novice blogger as I really only took one picture doing our visit as I was just too busy looking and browsing. Next time I will do better, I promise! For now, I have used some of the lovely photographs on Facebook and Instagram to give a better impression of the wares for sale.

It is usually quite difficult to buy speciality embroidery threads in the Netherlands as most shops just stock DMC stranded cotton. I was therefore pleasantly surprised to see a few stands selling a small selection of other brands, such as Caron, Kreinik and Madeira. I was even able to source two colours of Madeira Silk for the Home Sweet Home workbox by Carolyn Pearce. The thread list for that project is huge and most threads are not widely available, at least not outside Australia. This means I am very happy to be able to tick two more of the list, only 19 (of the about 65) to go! I bought my Madeira threads from Heikina de Ruijter at only €0,50 each as they were in their sale bin! They also had a number of Yazzii bags for sale on their stand, which was great to see!

My next purchase were some lovely wooden buttons form Funny Button. They are again going to be used for a Carolyn Pearce project. I recently downloaded a copy of her Embroidered Village Bag book which has recently been reissued as a digital download. I had it printed (as I don’t do digital books ;-)) and read through it. Again, there is a huge requirements list, including some shaped buttons. I didn’t think I would be able to buy those anywhere but then I spotted the Funny Button stand at the show. I was already planning to change the design of the bag to suite my style, as it is rather old fashioned for my taste and these buttons will just fit in perfectly.

It was really great to spot Kirsten Ballering at the stand of Caro’s Atelier. She is the designer of this year’s Scheepjes CAL, which starts next week. She brought all of the colour ways with her to the show, so for the first time I was able to see the scarf I will be crocheting in real life. It looks really beautiful and the scarf is so much softer than it looks in the photographs. I can’t wait! 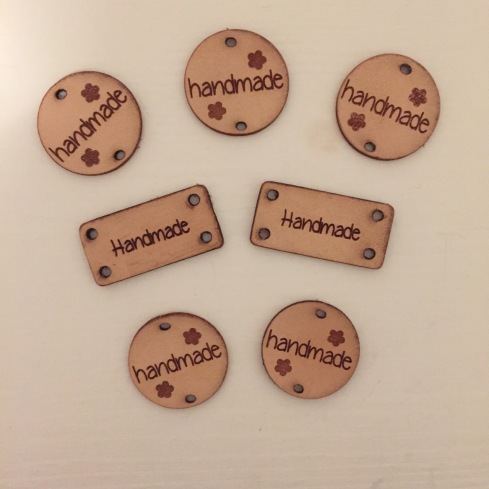 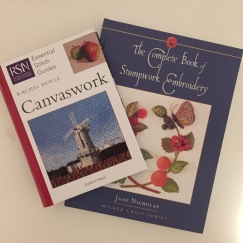 My mum and I also took part (twice :-)) in the prize-draw organised by Amann-Metler to win a set of Seralon threads. Unfortunately we did not win but I am still in with a chance to win the big case of threads. Fingers crossed, as I really like their threads for machine sewing as they don’t fray or break.

As usual, the Yorkshire Book Company had a large stand at the show. They are a bookshop specialising in needlecraft books and I think they attend every large needlecraft show in the UK and also in the Netherlands. They don’t have a website, or at least I could not find one, but do check them out at a show as they always have a great selection of quality needlecraft books. This time I picked up a copies of the RSN guide to Canvaswork and the Complete Book of Stumpwork Embroidery by Jane Nicholas.

My final purchases of the day were some lovely handmade leather labels from Wolcafé. I think they will add a nice touch to any of my handmade items. Wolcafé also makes bespoke labels, so that will be something to look into once the Stitching Sheep has got its own logo!

All in all, we both had a great day and I bought some lovely goodies for my next projects and was very inspired by all of the lovely items I have seen.

Had a really fun afternoon at my local (more or less, as it is half hour drive) thimble-collectors fair.
Loving my ‘new’ vintage knitting needle case. This one is made from bakelite by the company BEX (British Xylonite Co) and dates from the 1960s. They have produced several different designs of knitting needle cases and in various different colours (e.g. red, green, light green, light blue, pink and brown).
FOR SALE In case I have got you hooked on the little Observer’s books, I have got a couple for sale. They are £8,- each, apart from the Butterflies ones as they are £6,- each. I will ship anywhere, and will quote you the postage. If you are in the UK I am happy to hold on to them and ship when I am back in the UK to save you on postage. DM me if you are interested! #observersbooks
Look how pretty my collection of Observer’s books is looking on my new @stringfurniture shelving. The first shows them by colour and the second all in numerical order.
This side of my studio has pretty much been a mess ever since I took my big bookcase apart. I finally managed to tidy it up a bit today.
This afternoon I have made a base for the Tiffany lampshade I had bought at Tuesday’s Sunbury Antiques Fair.
Yes! I managed to fix the lid of my creative box this morning! I removed all of the excess fabric and added an extra magnet to the lid and recovered the back of the board.
When vintage finds and new purchases just match perfectly 😍😍😍
Already my last class of the week! It has flown by.